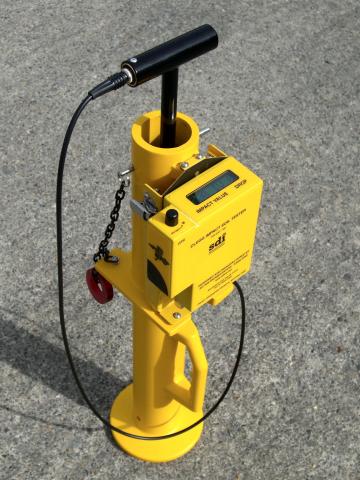 The 4.5 Kg CIST/88 with GPS Clegg Impact Soil Tester manufactured by SDi provides an easy and straightforward means for measuring and controlling soil strength and consolidation levels during trench re-instatement. The 884 readout is clamped to the guide tube and the displayed reading is viewed from the top during use. Single button operation design provided for easy use.

On board data logging and data storage with wireless data transfer facilities are provided with the CIST/884 instrument. Latitude & Longitude coordinates of the test location are received by the in-built GPS then stored providing users with an accurate location reference for later viewing in eg Google earth™. Users can download their site test results to a PC wirelessly by Bluetooth, using the PC software supplied with the instrument. This cable-free operation greatly enhances system reliability.

The instrument is used to confirm uniform compaction of over wide areas of ground, identifying poorly compacted areas and ineffective rolling of materials.

The Tester consists of a 4.5 kg compaction hammer operating within a vertical guide tube. The Hammer falls through the tube when released and strikes the surface under test, decelerating at a rate determined by the stiffness of the material within the region of impact. The readout registers the deceleration in units of Impact Value (IV). The IV is an indication of soil strength.

The Clegg Test was introduced by British Gas in the UK in 1990 following extensive laboratory and site testing. Since then several thousands of the instrument are now being used throughout the UK and overseas, with
operators employing the recommended test routines.

The Tester, described in the UK Design Manual for Roads and Bridges (DMRB) has been approved by the American Society for Testing and Materials and a Standard, under Designation No D 5874 was
issued in 1995, entitled “Standard Test Method for Determination of the Impact Value (IV) of a Soil”.

The Readout Unit displays readings of Impact Value (IV) and also shows the number of times that the hammer has been dropped during each test operation. The number of GPS satellites detected is also displayed confirming successful GPS location fixes.

Carrying out a test is quick and straightforward. The ground surface is brushed lightly with the foot to remove loose material and the guide tube is placed in position. The digital readout is located on the guide tube shown on the right during testing. The miniature high gain GPS antenna receives the satellite signals. The hammer is raised to a height of 450 mm as indicated on the hammer head and then allowed to fall freely. This procedure is repeated four times, the reading achieved on the fourth drop being recorded as the Impact Value. Software selectable %CBR display and recording is supplied. An automatic GPS measurement is taken with the hammer drops providing a Lat / Long fix.

Tables of target IV for a range of backfill and subgrade materials are given in the operating manual, enabling the operator to check the compliance of reinstatements with the specification levels.

Specifications subject to change without prior notice.

Go back to Road Applications products >>

SDi use Portable Document Format (pdf) to publish and distribute documents on this site. This format allows you to download documents and to view and print them for your own use.